Long before any space program was launched, and certainly long before "Star Trek" and "Star Wars" were ever heard of, people were fascinated with the notion of outer space/deep sea,of the infinite possibilities of life on other planets and in other galaxies, dating back at least to the literary works of Jules Verne and the 1902 silent film, "A Trip to the Moon."

This interest has for decades been reflected in a great variety of space-themed toys (Robots,Astronauts,Aquanauts),pulp magazines and comics that are all enthusiastically collected.

Naito Shoten's Deep Sea Robot is a valuable toy in the extreme,considered by many collectors around the world as a gracious underwater astronaut!..

It comes straight from Jules Verne's world of "20,000 Leagues Under the Sea". 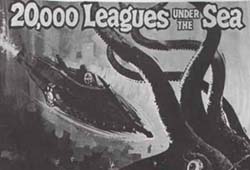 Original packaging is pretty colorful and surely adds to an already expensive purchase. (toy and box picture courtesy of Alphadrome)